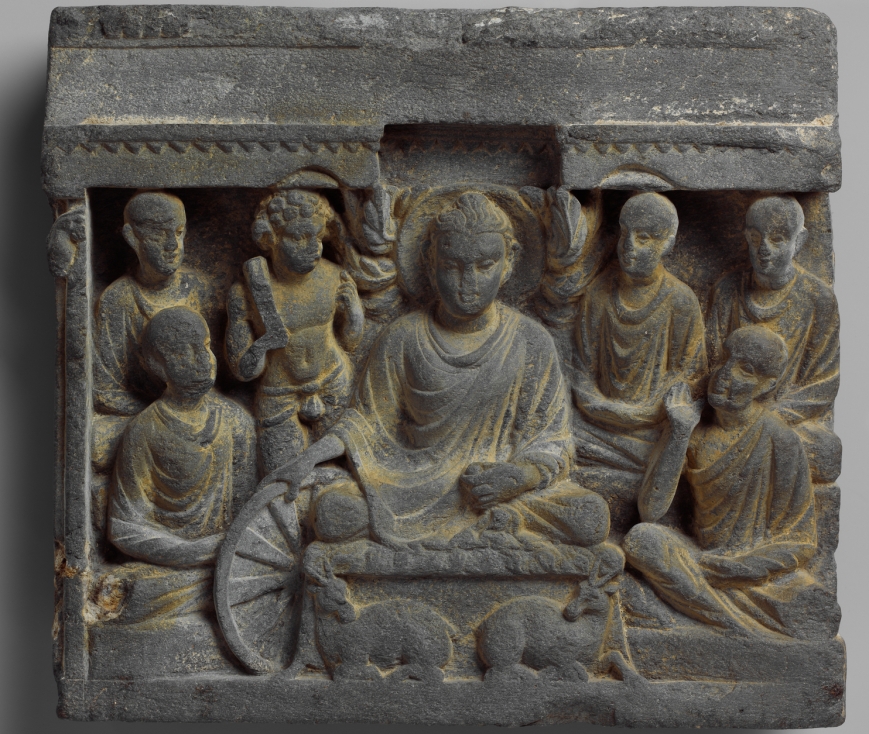 A commentary on the Discourse on the Turning of the Wheel of the Dharma, Dhamma-cakka-ppavattana-sutta

The introduction and the conclusion of this discourse imply that the Discourse on the Turning of the Wheel of the Dharma was the very first discourse taught by the Buddha; his opening performance, as it were, like Abba’s ‘Waterloo’; it represents the Buddha bursting onto the scene, the world’s greatest spiritual teacher making his debut. But, from a scholarly point of view, it is unlikely that this discourse is any kind of record of the Buddha’s first sermon. Firstly, it presents the doctrines of the four noble (or ennobling) truths and the eightfold path in sytematic ways, but we know from other early Buddhist texts (most notably, the Chapter of the Eights and the Chapter of the Way to the Beyond, the last two chapters of the Sutta-nipāta) that earlier presentations of the Buddha’s teaching were unsystematic and did not involve lists. One might well imagine that the Buddha developed his teaching style, involving lists and systems, over his 45-year teaching career. Secondly, the discourse presents the eightfold path as if everyone is familiar with it already. So it would seem that, in fact, the Buddha’s first sermon is a later literary construct, an idealisation – the first great teaching of the Awakened One. But this is not to demean it. Indeed, the very opposite – it is to say that this discourse presents, in a vivid literary form, the Buddha’s signature teaching; a first sermon in the sense of what the early Buddhists thought the most typical of their teacher.

The discourse is set in a deer park, known as Isipatana (which means ‘Deer Park’, in an older dialect) outside Vārāṇasi, where his five former companions are continuing their life of austerities. The place is now known as ‘Sarnath’ – it is one of the main Buddhist pilgrimage sites, and has an ancient stupa, remains of old monasteries, and guest houses for modern pilgrims. 2,500 years ago, of course, the place would have been just a clearing in the jungle. Another early Buddhist discourse, the Discourse on the Noble Quest, explains how the Buddha managed to get the attention of the five ascetics. It was difficult, because they believed that he had given up the practice of austerities, that he was a back-slider and had reverted to a life of indulgence. But he invited them to examine his words and, having done so, make a decision about whether he was a loser or not. This is another version of the argument the Buddha makes in the Discourse to the Kālāmas – stressing the importance of deciding for oneself about a teaching, not just taking someone’s word for it.

The Buddha first teaches them what he calls the ‘middle way’ between two extremes. We have to remember that the five ascetics were hardened spiritual warriors. They would have had no problem agreeing with the Buddha that the life of indulgence in sense-pleasures was not going to lead to insight and freedom. I guess none of us would be here if we really believed that a thoroughly hedonistic lifestyle was the best kind of life. We would be down the other end of the Gloucester Road in one of those restaurants for which Bristol is noted, planning a winter getaway to a Sri Lankan beach resort. But here we are. But the ascetics would have been surprised to hear the Buddha say that the life of self-mortification was the other extreme. These ascetics were a bit like the body-builders or iron-athletes of today, who seek to control the body with the mind, to be a pure will, a sort of living chisel with which to carve a way to the truth.

By contrast, the Buddha’s middle way is an alternative to both these extremes. Firstly, it is a way ­– it is a means for making a journey, from here (from this situation) to there, to awakening, freedom. Secondly, it is eightfold – in brief, it consists of wisdom (right vision and resolve), ethics (right speech, action and livelihood) and meditation (right effort, mindfulness and concentration). In short, it is way of life, a way of living here and now which is beneficial and which conduces to our well-being. By the standards of asceticism in the Buddha’s day, his teaching was a soft option – it involves actually cultivating the profound pleasures of meditation. From our point of view, however, the Buddha’s teaching also involves the systematic development of ethics and meditation – it involves a definite commitment.

The Buddha then goes on to present this middle way from another angle: the four noble truths. The Pāli here is ariya-sacca, and although we have got used to the translation ‘noble truth’, this can give the misleading impression that what is being taught is somehow super-true because is is noble. But really the point is that the truths are facts, or ways things actually are, and they are spiritually ‘ennobling’; this is a better translation really.

The first ennobling fact about things is that there is dukkha. This word has a broader connotation than ‘suffering’. It includes the sense of unsatisfactoriness, frustation and imperfection. The Buddha characterises this dukkha in three groups: there is physical suffering (sickness, birth and getting old), there is experiential suffering (association with the unloved, separation from the loved, not getting what you want), and there is a deeper structural suffering involved in our appropriating and holding on to our experience. This world, our lives, are not perfect, they involve frustation, as well as suffering and pain – this is the fact of dukkha. Later in the discourse, the Buddha goes on to characterise the significance of this fact – the ‘task’ it implies. This dukkha is to be fully known. What this means is that we should turn towards this dukkha, get to know it. This, of course, is completely against the grain of our usual strategy, and is the open secret of mindfulness meditation – we turn towards what is happening in immediate experience, with awareness and positivity.

The second ennobling truth or fact about things is that this dukkha has an origin, a causal condition, and that that cause is taṇhā, a word usually translated ‘craving’ but which could also be rendered ‘desire’, ‘wanting’. But how can this desire or wanting be the cause of dukkha? Surely, our desires represent ways to make ourselves feel better. The answer is that this ‘wanting’ is something much deeper. The word represents not so much our conscious strategies for cheering ourselves up, but the nearly-unconscious tendency to react to pain with avoidance and to pleasure with a kind of compulsion. Hence the Buddha indicates three kinds of wanting. There is wanting sense-pleasures; there is wanting to become someone, to hold on to our identity; and there is wanting to not become, to get out of the whole situation. The problem is that this reactive tendency, of whatever kind, doesn’t really work, or only works up to a point. The ‘task’ that the fact of our reactivity implies is this origin of dukkha is to be given up, let go of. Easier said than done, you might well say.

But the third ennobling truth is that there is cessation, nirodha, the fact that this dukkha has an ending. Thank goodness for that – if there were no ending to dukkha, it would hardly be worth engaging in the task of giving up wanting. But there is nirvana, the complete stopping of dukkha, the stilling and calming of reactivity. The task here is that this cessation is to be personally experienced. This is important. If we do not actually experience some calming and insight then why should we believe the Buddha’s teaching? It is important to notice whether our practice of ethics and meditation actually results in a personal experience of some calming of unsatisfactoriness, some resolution of our problems.

The fourth ennobling truth is that there is a path, magga, to the ceasing of dukkha. The idea of a path is a metaphor for a way to get to where you want to go. The eightfold path, involving wisdom, ethics and meditation, is a way of life, and this way of life is to be developed. An important point here is that this path does not really get anywhere. It’s more that fully developing the eightfold path is the end of dukkha – it is a life of awareness, of care for ourselves and others, of mental and emotional calm and insight.

The discourse ends with one of the five ascetics, Kondañña, having a breakthrough – that ‘whatever is of a nature to arise is of a nature to cease’. This is a way of saying that Kondañña had the insight that everything in experience is in a process of change. So we can change. We can learn to lean in to the dukkha quality of life, learn to give up reactivity, bit by bit, build on our personal experience of when and how dukkha ceases, and develop an awakened way of life. At this point, at the conclusion of the discourse, a shout goes up through the ranked hierarchy of deities – layer upon layer of sublime beings, up through the imaginary vastness of the Buddhist cosmos, each deity delighted that the Buddha has set rolling the ‘Wheel of the Dharma’. Again, like Abba with ‘Waterloo’, the Buddha’s first teaching is a big hit throughout the entire universe. Nothing will be the same again.

The Discourse on the Turning of the Wheel of the Dharma is to be found in the Saṃyutta Nikāya, 56:11. My summary translation; other translations by Bhikkhu Bodhi and by Ṭhanissaro and others.

This commentary is based on a talk given at the Bristol Buddhist Centre, 31 October 2017.